We managed to squeeze in some snaps of James's Specialized S-Works Epic Torch Edition between the time team mechanic JP Jacobs completed the build and James Reid picked up the bike before leaving for Rio.

Along with some other Specialized supported riders, James will be riding the S-Works Epic FSR Torch Edition frame at the Rio Olympics. The Torch edition is so named as it changes colour from orange to yellow when the frame materials reach 22 degrees, mimicking a flickering flame during the transition.

JP has fitted a brand new 2017 RockShox SID World Cup fork with Specialized's Brain technology replacing the new Charger Damper system. The new fork makes use of Torque caps which makes use of a larger contact area where the end caps meet the fork dropouts the bond stronger and the wheel stiffer . The only problem is that these Torque caps are not readily available for non Boost applications. JP wasn't having any of this and went and had the correct sized caps machined so that James's bike could take advantage of this new feature. The shock is Specialized's custom Fox FutureShock paired with a Brain inertia valve placed on the non-driveside chainstay. James prefers the firmer S-Tune on the shock which allows him to run lower pressures.

Despite SRAM sending James an XX1 Eagle 12-speed drivetrain, James has opted to stick with the 11-speed XX1. One reason is that he is familiar with the set up after racing on it all season, the other is that his ROTOR crankset, chainring and power meter are not yet compatible with the 12-speed technology. James is somewhat of a data geek and relies on the information his power meter provides during races.

In the cockpit the S-Works theme continues, with a S-Work carbon handlebar and seatpost as well as an S-Works Power saddle. James rides his bike slammed with a negative 17 degree 110 mm Specialized stem. The grips are the silicone type made by Supacaz.

JP is a perfectionist and where he can he will try to eke out every little last ounce of performance. He uses lighter grease on the bearings to improve their performance, especially in the suspension and wheels. He admits that it does not make a good long term solution but he strips the race bikes so regularly that it never becomes a problem. So do not try this at home people. Lighter titanium bolts are used where possible like on the disc rotors and pinch bolts. In other cases, JP drills a hole down the centre of the bolt to reduce weight, he also shaves off any unnecessary length. Things like the headset cap bolt which come on and off the bike regularly are left with more durable materials to avoid breaking and stripping.

Specialized Bicycles Africa steps up to support retailers and riders

Backyard Bike Checks: Show Your Bike Some Love and Win

Waaaaaaaay before then, dude...

Yeah I remember burning and freezing my fingers because of this in the 80s already.

Some say that there are a limited number of these helmuts and pairs of skoens available at your local Spaz outlet... I know of at least one Spazhole in the East Rondt with a helmut.


Even though I won't use it nearly as much as the price tag would warrant, that's one bit of tech I reaaaally want to get hold of.

Even though I won't use it nearly as much as the price tag would warrant, that's one bit of tech I reaaaally want to get hold of.

Agreed, I would love to have one and fiddle but cannot justify the price tag and maintenance that comes with it...

Agreed, I would love to have one and fiddle but cannot justify the price tag and maintenance that comes with it...


Yeah man. Same reason I use strava. I'm a bit of a data whore sometimes

Why would they not use the S-Works name on the frame?

"Bubble Gum Blue Skokker" now that is a song title that belongs on the next Karavaanpark Treffers CD, maybe Patricia Lewis can do it!

Guys it's not about the suspension..its about the yellow-orange ..orange-yellow [emoji12]

What I`m saying is that for that complicated soup, simplicity is better. The Spaz frame is not as simple as it could be. I say there is a scientific difference, I`m not saying its going to make the difference between winning and losing for 2 different riders.

No, that's not what you're saying. You're saying that one design is intrinsically better than all others, due to 2 very specific reasons - Solid rear triangle & shock position.

What I'm saying is that you cannot say that. It's not that simple.

There may be a demonstrable difference in the stiffness characteristics between the Silverback and, say, a Spaz, due to the solid rear triangle and how it's constructed, but in that solid rear triangle they have (relying on the seatstays to flex during shock compression) they're giving up a bit of sensitivity in the suspension stroke. Something that is important for both ascending technical climbs as well as descending. Incidentally, this design is more or less the same as Giant's STANCE - their BUDGET Trail bike.

If simplicity were the answer to everything, we'd all be riding Oranges or Santa Cruz Butchers. Ultimate simplicity, single pivots with no fuss. Just relying on pivot positioning to get the desired suspension performance.

But it's not. The EVIL line of bikes, for all their complication (despite being a single pivot bike) are hailed as one of the best performing bikes on the market. Then the SB5c and SB6c (yeti) also hold the same praise, but perform in a different way to the Evil. 2 very different suspension designs, yet both cream of the crop. Then you have the Spaz enduro - the game changer of the last 4 years, largely hailed as the single bike that changed what a niner could be, and remains one of the stalwarts of the enduro bike field.

You're going to have to bring a lot of data to this fight in order to convince us that the SB design is better than anything else - and that's what you're claiming.

If this was really the case, why would they have their best candidate (JK) for a win on the heavier option?

it is really the case, sid is a lot lighter

When it comes to my taste in bikes, I like it all to be matchy matchy...
The paint job is awesome, the bubblegum blue is classic, change the saddle and grips to black and stealth decals, you will have a looker.

it is really the case, sid is a lot lighter

Yep. For XCO at their weights, it's optimal and was necessary to contend with the Fox 32 StepCast. But I wouldn't trust it for my 106kg frame!

So, we are all in agreement then.  A funky painted Spez with an award-winning suspension design is still not going to help JR much in the race.

With a "science test"

Patch you make me laugh! think suzelle diy "it must be science"

Good Luck James!! Give it horns!

Annika Langvad is also riding one 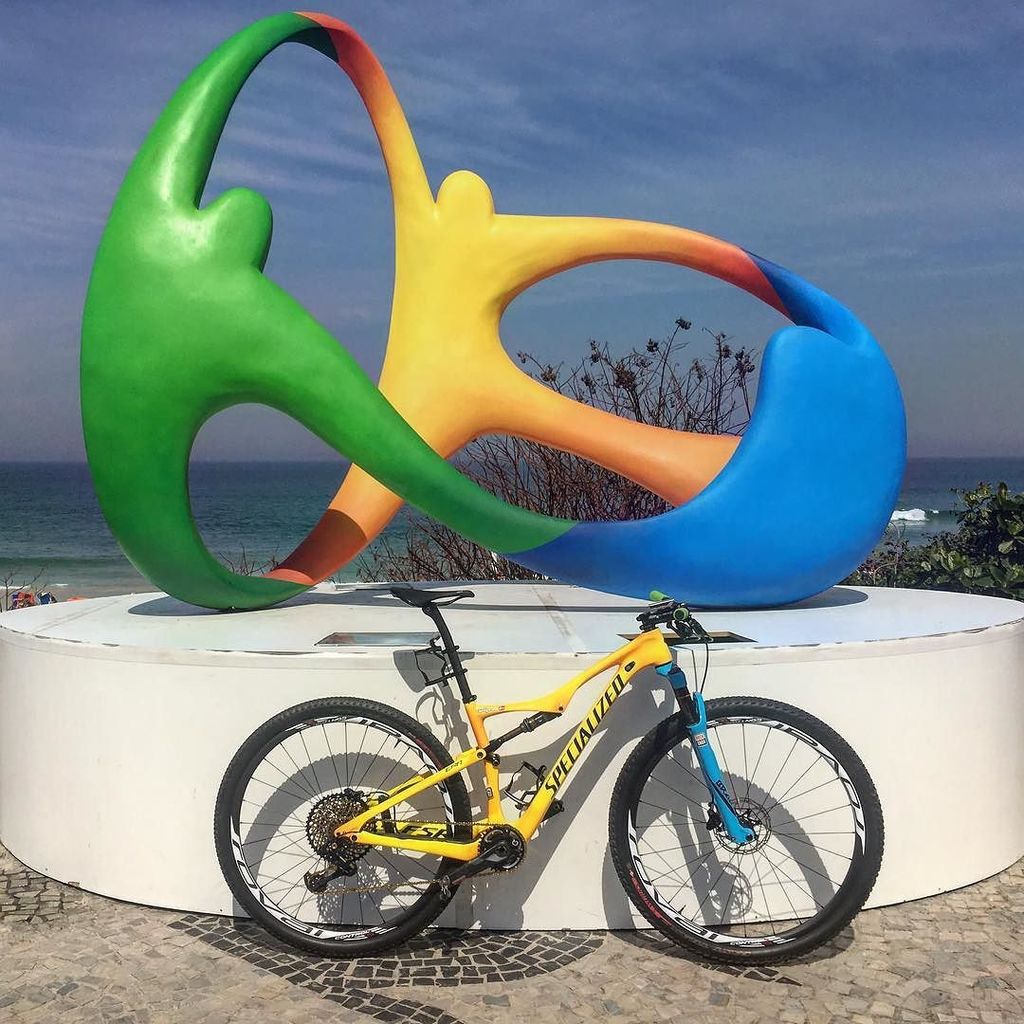 Annika Langvad is also riding one

All the Spez sponsored riders are and have been riding them.. we saw lots of chameleon bikes during the road races.

The fork is 100mm. I can back this up with PROOF if needed.

The fork is 100mm. I can back this up with PROOF if needed.

Definitely 100mm. You can see it in this pic. There are 2 sets of sag measurement markings, one for 80mm and one for 100mm. The fork is sitting just about 10mm below the 10% sag markings on the 100mm scale

the fork is however