In an event where R100,000 bicycles are the norm, the Signal Elite certainly stands out. Impressively, the Signal Bikes team of Oliver Munnik and van den Heever managed to surpass the majority of the more expensive bikes in the race, placing 38th overall in the general classification. We take a look at Oli Munnik's Cape Epic race bike below.

The Singal Elite is an aluminium hardtail. The retail version sells for just under the R20,000 price point. It arrives with a very capable built kit including Shimano XT/SLX mixed drivetrain, RockShox 30 Silver fork, and Alex rims on Shimano hubs with CST tyres. Although Oli's bike has seen significant upgrades (which may still be considered modest in Cape Epic terms), the Signal Elite frame he rides is as you get it off the shop floor.

The gearing is SRAM's 12-speed GX Eagle system with a cSixx 34T chainring and Truvativ Stylo cranks. SRAM Level brakes are tasked with the job of stopping the Pinner.

Oli rolls on cSixx carbon rims with Maxxis Recon Race tyres with a 2.35-inch width. It's a DT Swiss 350 hub for the rear wheel and a Hope Pro4 does duty on the front.

In the cockpit, a 110mm KCNC negative angled stem holds a 730mm carbon cSixx handlebar. The cSixx top cap adds a personal touch. The Fox 32 Step-Cast fork has a remote lockout which is mounted on the left side of the handlebars.

Gone Racing: Cape Epic - The Race That Never Was

The Battle for (Absa) African Pride

The race for the Absa African Women's jersey
43 Comments

Budget... Really?!? That bike is not so far from the "expensive" epic bikes IMHO... Good on you for racing on a super specced aluminium frame bike! Now hand it over! I will race with an "entry level" bike anyday!

The upgrades cost almost as much as the original bike!

I would love to hear Oli's race report - as he did after the Attawkas.

Yeah Oli's version is far from the stock version that is considered "entry level".

He has done moersa upgrades and really takes this bike from "entry level" to an extremely capable HT.

Could he not get same length valves? Pfff Amatuer

Would be intresting to know what this bike would cost in this kit, probs a massive amount less than other similar spec bikes.

Oli is super talented on a bike,

I'll play devil's advocate but i reckon on his Blur he'd place the same too.

had he ridden it stock stock, then we'd probably see some different results

Oli is super talented on a bike,

I'll play devil's advocate but i reckon on his Blur he'd place the same too.

had he ridden it stock stock, then we'd probably see some different results

All depends on partner.

Didnt he end Top 20 with Matt Beers a couple of years ago?

All depends on partner.

Didnt he end Top 20 with Matt Beers a couple of years ago?

he's partner was no slouch this year either. he's not Matt Beers but he's quite capable

I thought the whole point of this exercise was to prove that you don't need to spend a lot to be able to do the Epic.  Taking a cheap bike and throwing proper kit on it changes that aim and defies the point.

The upgrades cost almost as much as the original bike!

I would love to hear Oli's race report - as he did after the Attawkas.

Those wheels alone are worth more than the entire bike, then the groupset, handlebar and Fox 32 fork. Closer to 3 times the value of the bike off the showroom floor.

Agree with the general consensus here.Upgrading the bike to that extent makes the article completely pointless. I remember the first Epic a te@m from Kenya rode on sponsored trek bikes. Bottom of the range 26 inch V brake crap. Finished top 30 if memory serves correct so it’s all been done looong ago.

While I admire the attempt to launch a new entry level bike in the market,it’s a very tough nut to crack. Remember you can get a Cannondale for 5 k from Makro 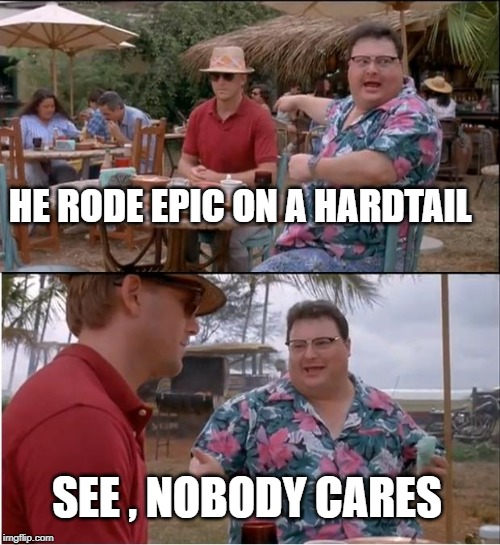 I care gives us hardass I mean hardtail riders some hope. hahaha

Absolutely BS that the bike upgraded to the extent that it was. The objective was supposed to demonstrate that an entry level bike can be raced at a gruelling stage race. Massive opportunity missed. I won't take signal bikes seriously again.

Series 9 CSIXX wheelset starts at R25k and up depending on hub's, SC Fox +-R12k then all the small bits carbon bar etc and Eagle about another R15k+. So its a sub R20k bike with nearest makes no difference R50k upgrades. So it's actually a R70k bike. Not really entry level or cheap.

Like buying a nissan micro and then putting a GTR motor in it . Dumbest article I've ever read.

But Have you seen the Juke R run though?

Lol slight upgrade is changing a shim stack on a fork or putting brass nipples on a wheelset - not replacing the wheels and fork, and sommer the rest of the bike for that matter (is anything but the frame the same as the retail version?) - and then claiming it costs a fraction of the 100k bikes that are at the epic. Well I guess 7/10 is still a fraction - just not the one they are trying to sell.

And the joke is that is the over exageration of the truth was left out and the jist was more - look, even a signal frame can be built up into a premium/serious race bike the majority of our comments would be positive.

Agreed this is a fail, guess we have come to expect such a high standard from Oli. The Bogan bit also copped some flack, but that was more a different taste issue. This was lame. Onwards and upwards to the next social media instalment Oli.

Especially when considering that a properly specked alu frame will oftentimes (not always) be lighter than a entry level carbon frame with the same spec.

A lot of the Epic is now dressed up as untamed and hard-core, but imho is just that - dressed up, beneath it are camper vans, lux options everywhere, massages, biketweaks, guesthouses, helicopter transfers between race villages etc etc. No problem with that, each to their own. Sitting on the plane on Monday morning, Epic finisher shirts, entrant wrist bands - the machine rolls on.

What i will say is that at the pointy end of the race the guys are 'bleeding out of their eyeballs', that level of effort can't be bought, kudis to those.

I fully understand what you guys are saying regarding the stock entry level bike and what Oli was riding are 2 different bikes. The way i see it, 1 - doing a tough 8 day stage race with a alloy hardtail, 2 - top 40 placing in strong international field. The brand SIGNAL was noticed as apposed to Oli riding on a Blur and someone saying ‘It’s just another Santa Cruz’.

Quite frankly, I could have built up an IBIS DV-9 for less money than this POS-slapped-on-brand-name-polished-turd cost and it would still be a better bike.

I fully understand what you guys are saying regarding the stock entry level bike and what Oli was riding are 2 different bikes. The way i see it, 1 - doing a tough 8 day stage race with a alloy hardtail, 2 - top 40 placing in strong international field. The brand SIGNAL was noticed as apposed to Oli riding on a Blur and someone saying ‘It’s just another Santa Cruz’.


For sure, awesome achievement. Just don't market it as a budget bike when it is anything but that. Call a spade a spade. That's a premium (and expensive) build through and through. I think what they are doing with Signal is awesome - good spec on their bikes, good prices. But you are taking your customer for a fool by telling them that a 20k Signal did the Epic - I'm sure it can, but it didn't.

I keep telling people hardtail is good enough, glad they illustrated it so well.