The Swift Ultravox is a top end do it all carbon road bike built to perform in all aspects of road racing. SwiftCarbon is among a growing selection of manufacturers worldwide opting for the direct to consumer approach. Naturally cutting out a few links in the chain means thinner margins and a lower end cost. This enables Swift to deliver pricing on what is said to be a top end product at significantly lower pricing than most competitors.

The frame carries the characteristic Swift look of a meaty squared downtube and angular finer features. What first struck me about this bike was the leaf-like seat stays meeting in a blade of carbon at the rear brake mount. In contrast, the headtube, downtube, bottom bracket, and chainstays are almost oversized providing the Ultravox with a super sturdy base infrastructure.

Thanks to internal routing the clean lines and finer details of the design aren’t interrupted by a nest of cables. A cable management box is located beneath the bottom bracket to ease the task of internal routing which can be a bit of a pain for those wielding a wrench. The Ultravox is also Shimano Di2 compatible should you want to future proof or go electric out of the box.

The squared profile through the downtube and bottom bracket is distinctively Swift.

The RS-1 variant tested shares the same tooling as the Ti (Team Issue) version only differing in the carbon fibres used in the layup. The key difference comes in the added stiffness on the Ti version, but frankly, as you’ll see later, I’m not sure any more stiffness is needed.

One thing which resonates from the team at Swift Carbon is that they are all about the detail. This carries right through from manufacturing to end product specification. One example of this is something called Finite Element Modelling (FEM) where they use digital models to understand how the choice and direction of carbon fibres impacts the frames response to loads. This lets them optimise various points on the frame to ensure that they exhibit the desired properties.

Look behind the brand and much of this obsession with detail stems from Mark Blewett - a South African ex-pro cyclist with a background in industrial design. Based just thirty minutes from the production facility in China, Mark has been integrally involved in the development of the bikes and is able to ensure his high-quality standards are continually achieved. Mark also happened to ride from Cairo to Cape Town on an Ultravox late last year.

The Ultravox RS-1 is specced by the team in Cape Town and each component has been incredibly well considered. As a result, there is nothing I would want to or need to change out of the box. Of course, you could add a race day carbon wheelset into the mix and with this in mind Swift do offer an “Ultegra Race” build with your choice of Zipp Firecrests (202, 303 or 404’s). That is of course if your wallet has a bit more appetite.

The model tested was fitted with full Shimano Ultegra, a Ritchey WCS finishing kit and Mavic Aksium Elite wheels. The Shimano Ultegra groupset already has a reputation that needs no fluffing or further mention aside from the semi-compact (52-36) chainring combo which should provide an ideal range for most riders.

The Ultravox RS-1 is topped off with Ritchey WCS alloy bars, stem, and seat post with a Ritchey Streem V3 WCS saddle. I’ve always been a fan of Ritchey components in both function and form. Much like the Ultegra group, the WCS range offers a great mix of proven reliability, performance, and weight. Here the attention to detail from the Swift team is evident in a choice like Ritchey’s 220-degree stem which is said to create a more secure stem-handlebar interface and still shaves grams.

The Mavic Aksium Elite wheels are wrapped in Mavic Yksion 700x25C tyres in line with the trend towards wider tyre widths. The Aksiums are very much an entry to mid-range wheel and although they do not quite stack up to the rest of the build, they offer incredible stiffness and great ride quality at a reasonable weight of 1735g for the pair.

The Ultravox’s stiffness and the immediacy of power transfer through the lower frame are evident as soon you get going. So much so that I had my doubts about comfort on longer rides. The Ultravox does have an incredibly firm ride, yet, contrary to my initial expectations, it is smooth and surprisingly forgiving. The leaf-like seat stays combined with the added tyre width help soak up most of the bumps. In testing on a selection of Cape Town’s most dubious road surfaces the ride remained comfortable and stable.

Out of the saddle that feel of stiffness carries through into the meaty headtube. Every ounce of effort driven through the pedals appears to push you forwards with no observable lateral flex under heavy loads. This makes for super fast acceleration and an overwhelming sense of efficiency in each pedal stroke. The sturdy front end does mean you get a touch more feedback from the road and on longer rides you might notice a little more fatigue in the hands and arms. But for the overall ride quality and efficiency it’s a trade-off worth making and easily addressed with padded gloves or bar tape.

The Ultravox felt comfortable from the outset, no doubt in part thanks to the extra attention paid by the Swift team to ensure our test model was set up just right (just as they would for a paying customer). Overall the bike has a very assured and composed feel which carries through to its handling. Often new bikes require a few ice-breaker rides, but the Swift had me confidently lunging into corners on our first outing. The handling is superb, striking a perfect balance between stability and agility.

The Swift Ultravox delivers on its promise as an all round pro-level road racer. The incredibly stiff frame makes for an efficient and agile machine with a geometry that just feels right from the get go. For the more serious racer the wheels are an area with potential for upgrade, although the Mavic Aksiums will serve very nicely as a top notch everyday wheelset. Overall the intense attention to detail in the Swift Ultravox provides a package that is tough to beat on feel, performance and, thanks to their direct-to-consumer model, on price too.

SwiftCarbon returns to SA with launch of latest models

Great looking bikes that go well and are well priced, what is not to like?

Good looking roadie for sure

Big fan. And I have their entry level frame.

Must say, had I read this article sooner I may have purchased one of these a month back. Though my TCR is such a revelation as it is.

I'm testing one out next week. Can't wait!!

Great choice in frame and wheels!! Here is mine...

I don't think you can go wrong with these bikes, great value for money and an awesome ride.

Great choice in frame and wheels!! Here is mine...

I don't think you can go wrong with these bikes, great value for money and an awesome ride.

Old but best bike i had

Perhaps time to start a "show us your Swift" page....

73km/hr at Suikerbosrand on Sunday. Stable as can be with that crazy wind... Only my self preservation holding the bike back! My legs aren't so happy after the 2h15 ride

. Great place to test the bike with those fancy Token wheels!

Best machine I have ever owned!

Best machine I have ever owned!

I was a bit skeptical in the beginning but this bike grew very quickly on my.

Like in the first 500m on my first ride

The frame wheel combination lets it feel like a 100k bike

Been upgraded since with new bits, but still my favourite pic.

I've just had my first ride on my new Ultravox TI. What an amazing ride. Fast, stable, responsive and comfortable. Oh, and really pretty as well. Pics to follow.

The Ti frame advertised in the classifieds recently caught my eye.
Looked like a good deal except I'm off the bike currently and not sure about returning.
Somebody else is enjoying it now.!

I'm busy building up my swift Utravox RS1, I cannot believe the weight of bike so far. Cannot waite to go for a test ride this weekend. Agents are very helpfull 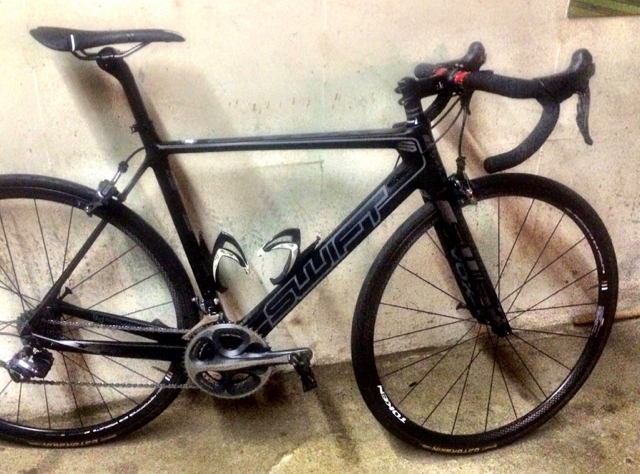 
Curbed my enthusiasm but it feels fantastic

My new Ultravox TI was delievered on Monday. I made my wife very happy by leaving her alone and riding 110 km with my mates on Woman's Day.

What a fantastic purchase I have made. Every single step of the interaction with Charles at Swift was world-class. I've ended up with a perfectly fitted dream-machine thanks to their open and friendly attitude.

The frame is truly magnificent. Stiff where it needs to be without being harsh. And the matte black finish generated lots of "oohs and aahs" from riders who spent twice as much on their bikes. The complete Ritchey finishing kit just adds to the look of class. And, what hasn't already been said about the 11 speed Ultegra Di2? Add that to my Fulcrum Racing Zero wheels, and I have a bike that made me smile for 4 solid hours and will probably continue to do so for years to come.

Plus, the value for money aspect is just phenomenal. As a loyal supporter of my LBS, I thought I'd never be able to match the value, advice and service of my local. Boy, did Swift change my perception.

Thanks to everyone at Swift Carbon. I am your most loyal, new brand ambassador and I look forward to seeing lots more of these amazing bikes on the road.